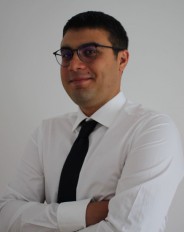 Antimo Marrazzo was involved in the Incubator 1 project a PhD student, and later a postdoc, in the group of Nicola Marzari. In November 2019, he presented his PhD thesis entitled "Electronic Structure and Topology of Novel Materials".

Antimo Marrazzo was born in Venice and grew up in Aquileia, in the north east of Italy, completing his bachelor’s and master’s degrees in physics at the University of Trieste. Though he was originally fascinated by theoretical physics, he became more interested in the practical applications of simulation and modeling already during his first year. Surrounded by a particularly strong community of researchers—the university is home to the team who created the software Quantum ESPRESSO, used for the ab initio simulation of materials—he ultimately focused his master’s work on the simulation of condensed matter physics. The strong connection between Trieste and EPFL, as well as EPFL’s own strong tradition of materials modelling, made it natural for Marrazzo to consider coming to Lausanne for his PhD.  After his wife, a physicist as well, also got an offer from EPFL, the decision was “self-made.” He arrived in October 2015 to start a PhD in the group of Nicola Marzari, where he is now a postdoc. In his free time, he enjoys sailing and playing the guitar.

What attracted you to THEOS?

It was a combination of things, but I was definitely interested in working with Nicola because I knew who he was and I knew the work he had been doing in electronic structure theory. At the time, I didn’t have a clear picture of the entire field, but it was clear to me that it was an extremely interesting place to be—it was a large group with many different research projects. When I was finishing my master’s in physics I was already doing simulations, but what I was working on was more theoretical and I wanted to move more into simulations and modelling real materials, real crystal structures with real atoms. I wanted to be able to do these first principles simulations that are very accurate and allow you to compare with experiment. The kind of simulation we do here really describes real materials. This is what I was looking for and Nicola’s group is very strong.

Part of it has to do with understanding. The reason I wanted to do science is because I like to understand nature and how it works. Simulations and modelling allow you to do this. You need to take something very complex like nature and make a model to make it simpler. This process of not just developing the mathematical model but coding this model into a software is what ensures that you understand the problem. Theoretical physicists are very good at writing fancy models or equations, but they can just be totally wrong…I mean, the equations may be beautiful to look at, but they may still be incorrect or just very hard to compute. But if you really understand something, it means that you can code that model, that equation, into software. This was important to me.

There is also something that has to do with forecasting, the ability to simulate what is going to happen, to foresee the future in a broad sense. (Though I don’t know if this gives you a sort of fake sense of control, you think you control stuff because you can predict what happens…) In natural science, this can be very strong because there are simple equations that rule everything. If you are good enough and find decent approximations you probably can predict things without  experiment if you do it properly and the setting allows it, that is, if you chose an example that makes sense. So these two elements, understanding and forecasting, are important to me. I also like modelling and simulation because it’s a tool that enables you to explore possibilities. You might wonder “What happens if I do this?”. Modelling and simulation allow you to do it really fast and find out.

I also like that in this field you can work in small teams, in small facilities, even on the experimental side. If you want to test some ideas, you just need two or three people, some machines and at a reasonable cost you can do your experiment. In particle physics though, for instance, at CERN, you need billions of francs and 4000 people to do anything impactful. You do what you’re asked to do and you end up being a very tiny part of a big machine. In computational materials science, you have much more control over your work.

If you give more money to theoretical physics, it doesn’t do any good if it just increases the number of guys following the comet ahead. So it is necessary to increase the amount of variety...and the only way to do it is to implore you few guys to take a risk with your lives, he risk that you will never become famous, the risk that you will never be heard again, the risk of going out in the wild blue yonder and see if you can figure it out.
—Richard Phillips Feynman
(meeting of NSF Postdoctoral fellows in Washington, around 1969) as quoted in Marrazzo's PhD thesis.

What’s the biggest challenge to pursuing a scientific career?

Everything basically boils down to the fact that people cannot take risks anymore. And risks are a fundamental part of this job. It’s a single problem but there are different ways to approach it. One is just to notice that it’s extremely hard to get a permanent position. The number of people who have the right skills and the right experience to do the job are many more, let’s say, 7 to 10 times more, than the number of positions in academia. And by this, I don’t just mean tenure track faculty position, but also in terms of permanent researchers. There are really few spots considering the number of applicants. This has to do with the fact that there are many more people who are doing PhD and postdocs, there are many more potential candidates, but also that, at least in some countries, the number of permanent positions…I’m not sure if the number has shrunk or remained the same, but for sure they haven’t increased a lot.

That is one thing and it’s a problem because of the very special nature of science. Doing academic research is not like any other job. In principle, you’re not paid to sell something to someone—and I’m not saying that it’s bad to sell—but the idea is that you cannot fool nature. There is this idea that the only metric to decide if you’re right or wrong is by testing your theories. You develop an idea and you do an experiment and if it’s correct, it’s correct. But if you start to put extreme competition among people who work in the field, researchers, especially young researchers, are tempted to find shortcuts. The extreme case is academic fraud, but it’s not just this. Maybe you start to work on a hot topic. You start to produce papers that represent a tiny contribution, very little activity, just to get quick, safe results in six months because you have a post of one year.

The difference between academia and the rest should be that you should be allowed to take big risks without risking yourself. I’m talking about long-term research, and in fundamental as well as applied science. But in fundamental science you need to be able to take the risk of spending two years on something without getting anywhere. Some people may think it’s a huge privilege, but to me it’s the only way science can work.

Most people struggle to find a permanent position, you have people on short-term contracts and they’re forced to go find something else. At some point, people are pushed to produce a lot of papers and publish a lot of results, even if they’re small results that are maybe not very important. This is also linked to the fact that with so many applicants for very few positions, governments, the agencies in charge of hiring need to put in some kind of metrics or regulations to help them decide who deserves a given job more.

Competition is of course good, but when you go to extreme competition you’re really squeezing and shaping the way people do science. There are a lot of problems that are a consequence of all this extreme competition and the lack of long-term perspective.  Nobody wants to take risks anymore.

If you weren’t a scientist, what would you be?

I’ve always been interested in math and physics.  I would have probably become something more like an engineer or have done something with coding or mathematics, some kind of technical job.  If I were to go totally away from all of this though, I’ve always been fond of sailing and everything that goes with navigation. I can’t say that I would have gone to the Navy, but maybe I would have explored a bit in that direction. I’ve always liked to play guitar, but I know that I would never have gone the musician route because I’m not good enough. I like it, but I don’t think I have a particular talent for it.

What is the best thing about working with MARVEL?

I like this idea of using very sophisticated mathematic or physics to solve practical problems that are very relevant to society, the idea of combining fundamental science with applications and technology. In MARVEL, you have a lot of groups and of course people are doing very different things, but they all share the view of materials and materials discovery. You have experts in a bunch of different fields and from a collective point of view they form an extremely strong team. This idea that everybody is good at doing something and you can put together the groups to do something extremely complex. And I think that this is somewhat special.

There are certainly other collaborations in the world, but to have in one single country this level of expertise in materials and materials modeling and a framework that allows people to collaborate, keeping this network of people connected,  is extremely valuable. This network is capable of tackling problems in an extremely efficient way. I really like this interaction—if I have a problem I just send an email to another member of this collaboration and it’s easy to do things together.

One is the PRL paper on the discovery of jacutingaite. This is the one that I care about most. I was really proud of that. I liked the research, it was a lot of work and a lot of effort, but publishing this paper was a great reward for all the work.

Second one is a bit more tricky. There is a paper that I always felt very affectionate towards, another PRL paper. It was an idea that I started in Trieste but kept in my pocket for a long time…it took like three years before it went to print. It’s a paper that maybe people will not use too much, but it was something I did for myself. A posteriori it was probably not that great, but I thought it was very deep while I was working on it. It is very elegant, I think.